The school is committed to protecting the safety, health and well-being of its employees and students and recognizing that abuse of alcohol and other drugs compromises this dedication. This drug policy is designed to assist staff and students to benefit from an alcohol/drug free lifestyle.

A school that participates in the FSA programs must provide drug and alcohol- prevention information to
its students, faculty, and employees each year.

In addition, a school that participates in the Campus-Based programs must have a drug-free awareness
program for its employees, which include a notice to its employees of unlawful activities and the actions
the school will take against an employee who violates these prohibitions.

In compliance with the Drug-Free Schools and Communities Act (DFSCA), the school has set forth in this guide the legal penalties under Federal law for the illegal possession or distribution of drugs and alcohol, as well as the range of school sanctions that can be imposed for violation of the school’s policies regarding substance abuse. Both students and employees should read this carefully.

The United States Department of Education has issued regulations for the implementation of the provisions of the “Drug-Free Schools and Communities Act Amendments of 1989” (Public law 101-226). The school will distribute annually to each student and employee information regarding the unlawful possession, use, or distribution of illicit drugs and alcohol by students and employees on school property.

The school is committed to a campus free of illegal drug use, misuse and abuse of prescription drugs,
underage drinking and alcohol abuse. The school has no tolerance for illegal activity or any other
harmful conduct influenced by drugs or alcohol. Unlawful possession as well as the distribution of illegal
drugs or alcohol is prohibited on school property or as part of its activities. The school will cooperate
fully with law enforcement agencies and will apply appropriate internal disciplinary processes should a
student or an employee violate criminal statutes with regard to illegal drugs or possession or sale of
alcohol.

The following shows the Federal penalties: 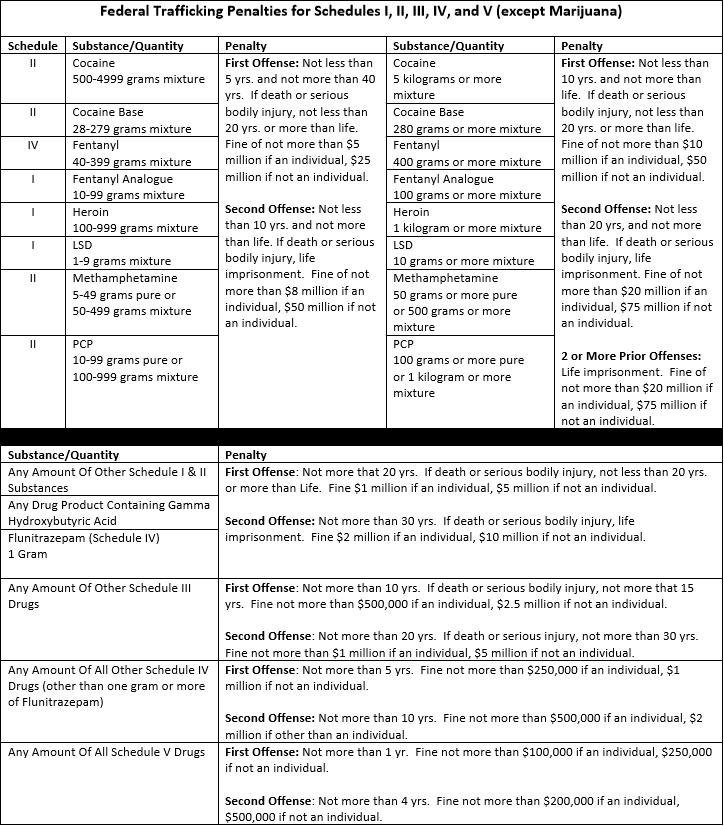 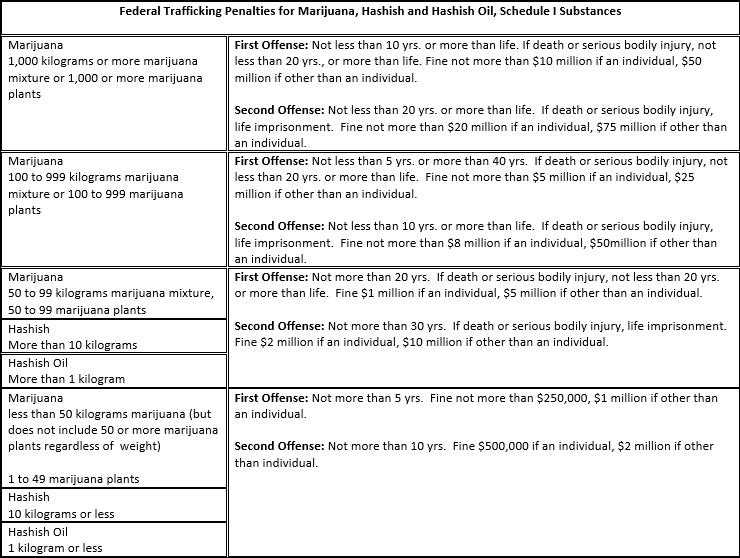 The following briefly summarizes health risks and symptoms associated with the use of alcohol and other drugs. It is important to note that individuals experience alcohol and drugs in different ways based on physical tolerance, body size and gender, and on a variety of other physical and psychological factors.

Alcohol consumption causes a number of changes in behavior. Even low doses significantly impair the judgment and coordination required to drive a car safely, increasingly the likelihood that the driver will be involved in an accident. Low to moderate doses of alcohol also increase the incidence of a variety of aggressive acts. Moderate to high doses of alcohol cause marked impairments in higher mental functions severely altering a person’s ability to learn and remember information. Very high doses cause respiratory depression and death. If combined with other depressants of the central nervous system, much lower doses of alcohol will produce the effects just described. Repeated use of alcohol can lead to dependence. Sudden cessation of alcohol intake is likely to produce withdrawal symptoms, including severe anxiety, tremors, hallucinations and convulsions. Long-term consumption of large quantities of alcohol can also lead to permanent damage to vital organs such as the brain and the liver. Mothers who drink during pregnancy may give birth to infants with fetal alcohol syndrome. These infants have irreversible physical abnormalities and mental retardation. In addition, research indicates that children of alcoholic parents are at greater risk than others of developing alcohol related problems.

Cigarettes and other Nicotine Products:

In 1989, the U.S. Surgeon General issued a report that concluded that cigarettes and other forms of tobacco, such as cigars, pipe tobacco and chewing tobacco, are addictive and that nicotine is the drug in tobacco that causes addiction. In addition, the report determined that smoking was a major cause of stroke and the third leading cause of death in the United States. Nicotine is both a stimulant and a sedative to the central nervous system. Nicotine is absorbed readily from tobacco smoke in the lungs, and it does not matter whether the tobacco smoke is from cigarettes, cigars, or pipes, Nicotine also is absorbed readily when tobacco is chewed.

In addition to nicotine, cigarette smoke is primarily composed of a dozen gases (mainly carbon monoxide) and tar. The tar in a cigarette, which varies from about 15 mg for a regular cigarette to 7 mg in a low-tar cigarette, exposes the user to a high expectancy rate of lung cancer, emphysema, and bronchial disorders. The carbon monoxide in the smoke increases the chance of cardiovascular diseases. The Environmental Protection Agency has concluded that secondhand smoke causes lung cancer in adults and greatly increases the risk of respiratory illnesses in children and sudden infant death.

Prescription drugs that are abused or used for non-medical reasons can alter brain activity and lead to dependence. Commonly abused classes of prescription drugs include opioids (often prescribed in the treatment of pain), central nervous system depressants (often prescribed to treat anxiety and sleep disorders), and stimulants (prescribed to treat narcolepsy, ADHD, and obesity). Long-term use of opioids or central nervous system depressants can lead to physical dependence and addiction. Taken in high doses, stimulants can lead to compulsive use, paranoia, dangerously high body temperatures and irregular heartbeat.

Marijuana use can lead to a number of long term and short term physical and psychological effects. Marijuana use leads to a substantial increase in the heart rate, impairs short term memory and comprehension and motivation can be altered.

Health risks may include changes in body temperature and blood pressure as well as heart and breathing rates. Even small amounts may cause the body to exceed its own limits, sometimes resulting in death. Snorting cocaine may severely damage nasal tissue and the septum. Smoking cocaine may damage the lungs. Someone using cocaine may experience muscle twitching, panic reactions, anxiety, numbness in hands and feet, loss of weight, a period of hyperactivity followed by a crash, a runny or bleeding nose, and depression. Other symptoms of cocaine use may include nausea, vomiting, insomnia, tremors, and convulsions. Chronic users may become paranoid and/or experience hallucinations.

Amphetamines, methamphetamines, or other stimulants can cause increased heart rate and respiratory rates, elevated blood pressure, and dilated pupils. Larger doses cause rapid or irregular heartbeat, tremors, and physical collapse. An amphetamine injection creates a sudden increase in blood pressure that can result in stroke, high fever, heart failure and death. An individual using amphetamines might begin to lose weight, have the sweats, and appear restless, anxious, moody, and unable to focus. Extended use may produce psychosis, including hallucinations, delusions and paranoia.

Anabolic steroids are human-made substances related to male sex hormones. Some athletes abuse anabolic steroids to enhance performance. Abuse of anabolic steroids can lead to serious health problems, some of which are irreversible. Short term side effects include depression, hallucinations, paranoia, severe mood swings and aggressive behavior. Major side effects also can include liver tumors and cancer, jaundice, high blood pressure, kidney tumors, severe acne and trembling. In males side effects may include shrinking of the testicles and breast development. In females, side effects may include growth of facial air, menstrual changes and deepened voice. In teenagers, growth may be
halted prematurely and permanently.

Because narcotics are generally injected, the use of contaminated needles may result in the contraction of many different diseases, including AIDS and hepatitis. Symptoms of overdose include shallow breathing, clammy skin, convulsions, and coma and may result in death. Some signs of narcotic use are euphoria, drowsiness, constricted pupils, and nausea. Other symptoms include itchy skin, needle or “track” marks on the arms and legs, nodding, lack of sex drive and appetite, sweating, cramps and nausea when withdrawing from the drug.

Medication and behavioral therapy, alone or in combination, are aspects of an overall therapeutic process that often begins with detoxification, followed by treatment and relapse prevention. Easing withdrawal symptoms can be important in the initiation of treatment; preventing relapse is necessary for maintaining its effects. And sometimes, as with other chronic conditions, episodes of relapse may require a return to prior treatment components. A continuum of care that includes a customized treatment regimen, addressing all aspects of an individual’s life including medical and mental health services, and follow-up options (e.g. community or family based recovery support systems) can be crucial to a person’s success in achieving and maintaining a drug-free lifestyle.

It is the school policy to discourage all violations of Federal, State or local laws by any member of the school community. In addition to possible prosecution and punishment by civil authorities, a student or employee violating any law may be subject to sanctions imposed by the school. Verve College will impose disciplinary sanction on students and employees (consistent with local, State, and Federal Law).

Sanctions against students include, but are not limited to, disciplinary expulsion, suspension, and/or probation. When appropriate, school sanctions may be entered into permanent records. Parents of dependent students will be notified of pending charges or subsequent decisions.

Verve College has a zero-tolerance policy for drug and alcohol abuse.Unlawful possession,use,distribution of drugs or alcohol, or suspicion (smell) will result in the student in question being drug tested. Students that test positive for drugs or alcohol will be immediately dismissed from the program.

Students will also lose financial aid eligibility should the student be found guilty of drug or alcohol abuse.

Should a student be required to get a drug test, the student will not be allowed in class until the specimen has been
submitted. Any hours missed will be financially unexcused.

Any costs associated with the drug testing are the student’s responsibility.

Faculty who violate the school’s standards of conduct are subject to disciplinary action including reprimand, suspension, or dismissal.

The school may impose sanctions against any employee who violates Federal, State or local laws, or the standards of school conduct. Depending on the nature and severity of the violation, these sanctions can range from warnings and/or mandatory referral for drug or alcohol rehabilitation to outright termination of employment.

Students and employees should know that their behavior and actions are subject to all local, state, and federal laws relating to drug and alcohol abuse. Verve College will bring violations of the standards to the attention of local and or proper law enforcement authorities.